According to one recent study, by 2040 there will not be enough water available to meet global demand for both drinking and energy production. The shrinking freshwater resources and growing demand will have negative ramifications for billions of people. In this article we discuss five consequences of a future with widespread water shortages. 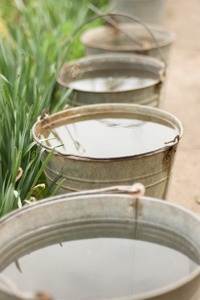 Increased Global Conflict
Freshwater resources are often shared by two or more countries which may lead to more international conflicts as freshwater becomes more scarce. The United Nations has identified 276 transboundry river basins and 200 transboundry aquifers. While treaties have outpaced acute disputes over the past 50 years (150 verses 37), the US director of national intelligence warned in a 2012 report that overuse of water could potentially threaten US national security.

Lack of Access to Clean Water
Currently 1.1 billion people in the world lack access to clean freshwater. Without access to clean freshwater, these vulnerable populations are exposed to deadly water-borne illnesses and water gathering can limit educational and economic opportunities. As the global population grows and water resources shrink, greater numbers will face the challenges of inadequate water accessibility.

Food Shortages
With a global population on pace to reach 9.6 billion by 2050, shrinking water resources will make it difficult for food production to keep up with rising demand. The United Nations warns that political turmoil, social unrest, civil war and terrorism could result from food shortages unless food production is increased by 60% by 2050. Agriculture already accounts for about 70% of global freshwater withdrawals to keep up with current food demand. Increased farm water conservation through water saving irrigation techniques are needed to slow the unsustainable withdrawals from groundwater sources.

Energy Shortages
World energy requirements are rapidly increasing with modernization and population growth, however energy production is one of the world’s greatest consumers of freshwater resources. In the United States, thermoelectric power plants accounted for 38% of freshwater withdrawals in 2010. Global electricity demand is projected to grow 70% by the year 2035 with India and China accounting for half of the growth. Alternative energy sources like wind and solar energy require far less water to produce but only make up a small fraction of today’s energy production.

Economic Slowdown
The United Nations estimates that half of the world’s population will live in areas of high water stress by the year 2030. It is difficult to have a thriving economy when fresh water is not easily accessible for industrial, farming, and individual use. Production of water-intensive goods like cars, food, and clothing could be limited by lack of freshwater resources. Lack of freshwater can also affect worker productivity by causing illnesses and higher water costs for individuals can reduce household disposable income.