While there will always be plenty of water in the world, the amount of usable freshwater that is easily accessible is rapidly shrinking due to a few key factors. 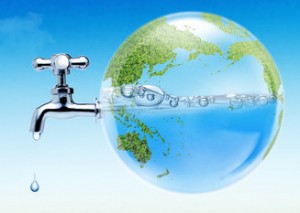 Increased Food Requirements of a Growing Population
About 70% of the world’s freshwater consumption is for agriculture and food demand is rising. The global population is increasing and becoming richer, which will significantly increase global food demand in the coming decades. By 2030, the global middle class is estimated to grow from 2 billion today to 4.9 billion and this will significantly increase the water required for food production. As people move from low income to middle class, demand increases for meat products which have higher water requirements than crops.

Increased Energy Requirements by a Growing Population
Energy production is the second largest consumer of water resources globally after agriculture. In 2010, thermoelectric power plants in the United States withdrew as much freshwater as farms (38% of the total freshwater withdrawals). The International Energy Agency projects that at current rates, freshwater used for water production will double over the next 25 years. At the current pace, there will not be enough freshwater available to meet global energy needs by 2040.

Increased Frequency of Droughts
The world’s changing climate has been linked to an increased incidence of droughts that can greatly diminish freshwater supplies in a region. The historic drought in California has depleted the Sacramento and San Joaquin river basins by an estimated 11 trillion gallons below normal seasonal levels. According to modeling by NASA, there is a high likelihood of megadroughts in the 21st century which span multiple decades.

Groundwater is Being Pumped at Unsustainable Rates
In numerous parts of the world, people are pumping out groundwater much faster than it is being replenished naturally. The Ogallala Aquifer is the largest underground water source in the United States and for decades it has been pumped at rates thousands of times greater than it is being restored. A Kansas State University study predicts that 69% of the Ogallala Aquifer will be drained in the next five decades at current rates.

Inadequate Water Infrastructure
Leaky pipes lose huge amounts of water on the way to homes in both modern and developing countries. It is estimated that in the United States 2.1 trillion gallons of treated water is lost each year from leaks. In Mexico city, aging pipes are losing 1,000 liters of water per second. Additionally, the lack of adequate water treatment is resulting in widespread pollution of freshwater resources. A UN and Pacific Institute report estimates that 2 billion tons of human, animal, and industrial waste are dumped untreated into freshwater bodies each year.