The global issues of freshwater shortages and increasing demands of a growing population has led to interest in the academic community in studying water issues. Here are 10 recent studies related to measuring water resources and seeking solutions to the water scarcity problem. 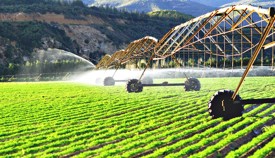 How Eating Less Meat Would Impact Global Water Consumption
While it is well known that eating meat requires more water resources, researchers at Aalto University have quantified the impact in a new study. They estimate that switching to a vegetarian diet would provide adequate food supply for 1.8 billion additional people without an increase use of water resources.

11 Trillion Gallons of Water Needed to Recover from California’s Drought
Satellite data allowed scientists to quantify the amount of water lost in California’s severe drought. Based on the data NASA scientists estimated that 11 trillion gallons of water are needed to return to normal seasonal levels.

Worldwide Water Shortage Expected by 2040
Researchers estimate that the growing energy needs will result in a worldwide water shortage by 2040. The researchers conclude that there will not be enough water to meet energy demands by 2040.

China’s Hidden Water Footprint
Researchers studied the richest provinces in China and their findings showed the high impact on the country’s water resources. Through consumption of water-intensive goods the richer provinces are drawing resources from water scarce areas of the country.

How Water Scarcity Can Be Reduced by 2050
McGill University and Utrecht University researchers have found a path to reducing water scarcity by 2050. A new paper outlines strategies to reduce water scarcity including increasing irrigation efficiency, increasing desalination, increasing water storage in reservoirs, and improving domestic and industrial water use.

Groundwater Reservoirs Are Shrinking at a Faster Rate
Hydrologist Petra Döll from Goethe-Universität Frankfurt am Main has made a new estimate on global groundwater depletion at 113,000 million cubic meters per year for the period from 2000 to 2009. This estimate is believed to be more reliable than older estimates and uses data from satellites and wells.

A Decentralized Wastewater Fertigation System
Bernd Leinauer and Elena Sevostianova from New Mexico State University published a paper that explores using a decentralized system that takes advantage of the nitrate in wastewater to efficiently fertigate lawns with drip irrigation.

Improving Desalination with Solar Power
While desalination typically produces carbon dioxide, Dr. Philip Davies from Aston University has come up with a method to use solar power to make desalination plants into net absorbers of CO2. This method would discharge magnesium oxide into the ocean which would neutralize ocean acidity and remove carbon dioxide.