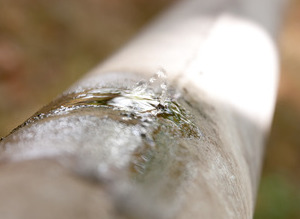 “If all of the estimated 2.1 trillion gallons of expensive, treated water that leaks from the country’s outdated systems each year sloshed its way to New York City, a 298-foot flood would swallow Manhattan.”

“Those pipes were put into ground anywhere from 70 to 100 years ago,” says AWWA’s CEO David LaFrance. “There’s massive needs for replacements. We estimate that over the next 25 years it’s a trillion dollar problem.”

“In 2011, the Environmental Protection Agency estimated that upgrading drinking water infrastructure would cost more than $384 billion.”

“Los Angeles city leaders say the 8 million gallons of lost water that could have supplied more than 100,000 people for a day.”

Infrastructure Issues Across U.S. Not an Easy Fix CBS News

“These systems were put in, some of them, as far back as the turn of the century,” said Brian Pallasch, a director for the American Society of Civil Engineers. “And it’s one of those problems where they’re buried, so they’re out of sight, and they’re out of mind.”

“California has reported $39 billion in drinking water infrastructure needs over the next 20 years.”

Over the coming 40-year period, through 2050, the investment needs for buried drinking water infrastructure exceed $1.7 trillion.

“In 2013 alone, Houston lost more than 22 billion gallons of water — 15 percent of the city’s total water supply — due to leaking pipes. That same year, there were 100 water main breaks in San Francisco.”

“A new study of California records shows that Bay Area water providers have been losing about 23 billion gallons of water a year due to aging and broken pipes.”

The Art of Water Recovery The New York Times

“The Environmental Protection Agency estimates (pdf) that public water systems lose, on average, one-sixth of their water — mainly from leaks in pipes.”

“There are 240,000 breaks a year, according to the National Association of Water Companies, a problem compounded by stress from an increasing population and budget crunches that slow the pace of replacement.”

The Case for Fixing the Leaks: America’s Crumbling Water Infrastructure Wastes Billions of Gallons, Dollars The Center for Neighborhood Technology

“In the Great Lakes states, a survey of water service providers estimated that 66.5 billion gallons of treated water is lost each year.”