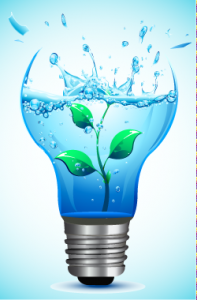 Droughts have threatened human welfare since prehistoric times. But in today’s world of rapid population growth, increased demand for food and cash crops and rising urbanization, water scarcity is a growing problem even in non-arid regions. Water demand is expected to increase 40 percent in the next 20 years, and although water is a renewable resource, quantities of freshwater are limited. Several new studies, however, have identified new strategies to aid the imbalance of water usage to freshwater supply.

The results of a Congressional-authorized study, funded by the Bureau of Reclamation and seven Colorado River Basin states, were released Dec. 12, according to Secretary of Interior Ken Salazar. The study projects water supply and demand imbalances throughout the Colorado River Basin throughout the next 50 years, and includes a variety of strategies to address the imbalances.

The Colorado River Basin spans portions of seven states, and is one of the most important sources of water in the western United States. In addition to the 40 million people who receive municipal water from the Colorado River and its tributaries, the basin supplies water for 22 Native American tribes, seven national wildlife refuges, four national recreation areas, and 11 national parks. The water supply is also used to irrigate about four million acres of land, while the Colorado River provides more than 4,200 megawatts of electricity through hydro-power facilities.

“There’s no silver bullet to solve the imbalance between the demand for water and the supply in the Colorado River Basin over the next 50 years – rather, it’s going to take diligent planning and collaboration from all stakeholders to identify and move forward with practical solutions,” Salazar said. “Water is the lifeblood of our communities, and this study provides a solid platform to explore actions we can take toward a sustainable water future. Although not all of the proposals included in the study are feasible, they underscore the broad interest in finding a comprehensive set of solutions.”

The study found future imbalance in water supply and demand will average to more than 3.2 million-acre-feet by 2060, with one acre-foot of water equal to the amount used by a single household in one year. The study also projects the largest demand increase will originate from municipal and industrial users. Currently, the Colorado River Basin provides water to about 40 million people, but the study projects the number may increase to about 76.5 million residents by 2060.

The study, which began in January 2010, offers more than 150 proposals from study participants, as well as stakeholders and the public. Suggestions include increasing water supply importing water from neighboring rivers or desalinization or Pacific Ocean water; or reducing demand through increased industrial and agricultural water conservation and efficiency plans, as well as reducing evaporation from lakes and canals.

“This study is one of a number of ongoing basin studies that Reclamation is undertaking through Interior’s WaterSMART Program,” said Anne Castle, Assistant Sec. for Water and Science. “These analyses pave the way for stakeholders in each basin to come together and determine their own water destiny. This study is a call to action, and we look forward to continuing this collaborative approach as we discuss next steps.”

The toilet is considered one of the most vital household fixtures, for obvious reasons. But it also accounts for about 30 percent of home water usage—more than showers, dishwashers or washing machines. Even water-efficient toilets use an average of more than 7,400 gallons of water per year, while traditional models can easily exceed 32,000 gallons of water-usage for an average US household of 3.2 people.

“It’s easy to think that we have this enormous indispensable water supply, that we do have about 20 percent of the world’s supply of surface fresh water right here at the Great Lakes,” Nancy Tuchman, an aquatic ecology researcher and director of the Institute of Urban Environmental Sustainability at Loyal University, recently told the Northwest Indiana Times. “We have the biggest supply on the continent, but it doesn’t mean that it’s going to be there forever—and especially with global climate change and all this evaporation and little precipitation that could build the water back up. So we need to conserve.”

Chicago’s Nancy Klehm, founder of Social Ecologies, has devised an unorthodox solution to commode water consumption. Her “dry toilet” is nothing more than a bucket filled with a layer of carbon-rich material such as dried leaves, sawdust or newspaper. After depositing waste into a dry toilet, a user simply covers the matter with a new layer of carbon-rich material. When the bucket is full, the contents can be dumped out or composted.

“For five bucks, or if I find a bucket and have some carbon material, I can actually build out a solution really fast,” Klehm told the Times. “It takes hardly any capital; it just takes some ingenuity and knowing what to do with it.”

In 2008, Klehm organized a trial, called “Humble Pie,” with 22 Chicago residents who tested the dry toilet process. She collected participants’ waste over a three-month period, then composed it with carbon-rich material for two years. The compost is now as nutrient-rich as “fertilizer” found at municipal sewage plants.

“Good soil is so hard to have in the city. I’m concerned about the state of our soil—they’re affecting our health, they’re depleted, or they’re contaminated or poisonous,” Klehm told Arthur Magazine.

The Environmental Protection Agency categorizes the sludge as a fertilizer, and it will now be used in Chicago gardens, including a 5,000-sqaure-foot greenhouse at a homeless shelter. Her study’s participants were not turned off by the process as one might presume, either.

“I was interested in this as an experiment,” Lora Lode, whose family placed a bucket in the bathroom and two storage drums on the back porch, told Arthur. Her 19-year-old son Charlie was eager to try the experiment. “I just think that if I didn’t have a house, this is what I would do,” he said.

Still, Klehm said a dry toilet must be done properly to be successful.

“Composting human waste should not be taken on unless someone is a very skilled composter,” Klehm told the Times.

Although the “yuck” factor will probably discourage most people from ever trying a dry toilet, water experts see it as an important innovation in water conservation.

“It’s a larger issue than just how much water we’re using,” sustainable water expert Wendy Pabich, who holds a Ph.D. in environmental engineering from Massachusetts Institute of Technology, told the Times. “When you buy a dry compost toilet, that’s all about recycling the nutrients and carbon in our waste, rather than sending them to rivers where the organic and nutrient load drive putrefaction – algal groves, fish kills and ecosystem changes.”

Researchers with Texas A&M’s AgriLife Research program are trying to promote water conservation for those who water their lawns. They are using the principle of evapo-transpiration—the amount of water a plant actively pulls from soil—to develop simple watering formulas.

AgriLife Research associates Charles Fontanier and Richard White are looking to history to determine if evapo-transpiration data can be used to predict watering needs in St. Augustine.

“The goal is to try to create a message that is easy to understand for both homeowners and landscape contractors that will also promote water conservation and healthy turf grasses,” Fontanier said in a Texas A&M release.

The researchers use various weather data to estimate daily evapo-transpiration, then relate that data to the grass or plant being grown.

“From the reference ET, we can adjust it to the different types of grasses we are growing, as well as perhaps a micro-climate: If it is a sunny spot or a shady spot,” Fontanier said. “So we can adjust the number accordingly. If the number for a warm-season turfgrass in Texas is 0.6, then 60 percent of the weather station output is what we should be applying to our grasses.”

The scientists used historical averages to set run times for a sprinkler system during the last two growing seasons. If, for example, St. Augustine grass has needed 4.25 inches of water each July during the past 45 years, they used that number to irrigate the grass in July.

“Ideally, we should be adjusting irrigation amounts based on what the weather station is telling us on a daily or weekly basis,” Fontanier said. “But keeping up with real-time ET data can be too time consuming. So our goal for this study was to demonstrate and quantify the effects of using historical average water needs as a predictor of actual plant water needs.”

“Looking at the two years we’ve had recently and comparing the differences, in 2011 when we really had severe conditions, our main goal with any irrigation was really just bud and crown survival,” Fontanier said. “If we kept enough plants alive, we could get regrowth once rains did come. In fact that is what we found. Even though we lost a tremendous amount of density in our deficit irrigation treatments, the grass survived and by March, we had close to 100 percent stands.”

At a glance, all of the study plots looked the same. Fontanier believes that shows grasses can survive seasonal reductions in irrigation.

“But if you look at the long haul, we think we will be right on the money or at least promoting some level of conservation utilizing historical ET as a base for irrigation,” Fontanier explained. “Historical and real-time ET data for locations across Texas are readily available online at the Texas ET Network. If these data are not available to your region, a general rule of thumb is that Texas lawns need about 1 inch of water a week from June through August. Sticking with these easy-to-remember strategies should, in the long run, help homeowners conserve water.

“And if you bring it down to a deficit from that, we can still have water conservation and the grass will stay alive,” Fontanier said. “The key is to make sure you have some moisture in the ground to maintain bud survival.”