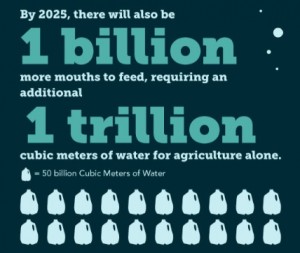 Unbeknownst to many of the millions who enjoy unfettered access to clean drinking water, much of the world’s population does not enjoy the same luxury.

Of course, having reliable access to clean water is not a luxury. It’s an absolute necessity, and according to the World Health Organization’s 2012 assessment there are 884 million people who have no regular access to clean water. Put another way, nearly 1 out of 8 people on the planet live without a reliable source of fresh water.

Bluntly speaking, though, they don’t live long. It’s a hard fact that deserves honest treatment, which the issue often does not get. There are many other facts tied to this global catastrophe that also do not get the attention they deserve, and so are listed below for your review.

A lack of clean drinking water is a severe problem, but thirst is hardly the most common cause of demise. Waterborne diseases are by far the most lethal killers on the planet, and illnesses like diarrhea, cholera, malaria and typhoid result in literally millions of deaths per year, with 1.6 million of them being children.

Sanitation rather than water availability is the issue when considering problems with waterborne illnesses. Standing water in populated areas is a drainage issue that creates breeding grounds for mosquitoes that carry malaria, while the lack of proper waste disposal is responsible for a host of other ailments.

People usually don’t think too much about what happens to water after it goes down the drain. The fact is that only a small fraction of U.S. municipalities recycle their water back into local supplies. The question is, if just 1% of one-tenth of America’s wastewater is treated and used to replenish reservoirs and groundwater, how much is this practiced elsewhere?

The answer is not much. A generous estimate is that only 10% of global wastewater gets treated at all, which means the majority of it is pushed back into natural bodies of water where it can be consumed downstream and make people sick.

3. U.S. Resources Are Not Immune

Five years ago U.S. news media reported that in five years many U.S. cities would be facing water shortages, and now that prediction has come to pass. In 2012 the U.S. experienced the worst drought in more than four decades and while resources dwindled it became apparent how scarce fresh water was in some areas of the country.

The next prediction is that states will begin to battle over water rights and that rationing will be the only solution. The frightening truth, though, is that these battles have already been raging and that the only thing left to follow is the restrictions placed on water use.

Water scarcity creates drastic situations for survival, and in areas where a lack of water has become a part of life certain traditions have taken root that are damaging entire generations of women.

All across Africa and other developing nations, women spend their entire day – every day for much of their lives – carrying water to their families. The jerry cans commonly used for this task can hold up to 50 pounds of water and are carried on the head or the hips of countless African women for miles. This causes myriad health problems that often go untreated, and this is not to mention the time spent carrying water cannot be spent with family or learning new skills.

5. Toilets Can Be Dangerous

A recent study by the Bill & Melinda Foundation found that 2.5 billion people on the planet use unsafe toilets or don’t use a toilet. This problem, which ties into the wastewater treatment issue, is exacerbated by a lack of education about things like hand washing and knowing how to identify an unsafe source of drinking water.

Many of these hurdles are overcome by education and there are numerous nonprofit organizations that make it their aim to provide developing communities with the learning tools they need to make a difference – even if they can’t help get them more water (see our Top 50 Water Non-Profit Blogs).