When most people think of major consumers of water resources they tend to focus on things that they can see like showers and lawn sprinklers. However, home water use is only the tip of the iceberg and a large majority of the water consumed is hidden from plain view. Here are some of the largest water consumers that are not obvious to the public. 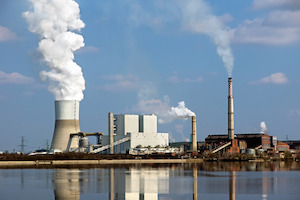 Electricity
People don’t often think of their lights, electronics, and appliances as major water consumers but energy production is the second largest consumer of freshwater resources in the world. Huge quantities of water are needed to cool the power producing equipment. This amounted to about 143 billion gallons of water per day of freshwater withdrawals in the United States in 2005 (41 percent of total freshwater withdrawals). The average American uses 670 gallons of water per day for electricity production which is much higher than the 100 gallons of water per day used for household purposes. By 2035, the world’s energy consumption will increase by 35 percent, which will increase water requirements by 15 percent according to the International Energy Agency.

Agriculture
While water experts are well aware that agriculture consumes about 70% of the global freshwater withdrawals and 40% of US freshwater withdrawals, this fact is not widely known by the public. A large percentage of this water is wasted due to inefficient irrigation techniques such as not measuring water use with irrigation flow meters. The water needed per year to feed the world will increase by about 1 trillion cubic meters as the population grows by 1 billion by 2025.

Almonds and Walnuts
According to a UNESCO Institute for Water Education study, shelled almonds and walnuts were among the top three most water-intensive foods. They require an estimated 2,126 and 1,226 gallons of water respectively to produce a pound of food. In California, almond trees cover nearly 1 million acres and consume 1.07 trillion gallons of water per year.

Manufacturing
Every product that you buy requires water during the manufacturing process. Approximately 39,000 gallons of water are required to produce a new car including tires while it takes about 2,100 gallons to produce a pair of leather shoes. Other notable products include a pair of jeans (about 2900 gallons), a cotton t-shirt (about 700 gallons), and a microchip (about 8 gallons).