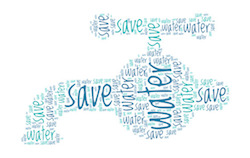 What Will it Take to End California’s Drought? 11 Trillion Gallons of Rain CBS

“A new analysis from NASA satellite data concluded that the state would need 11 trillion gallons of water to recover from its three-year dry spell.”

“Due to global warming, scientists say, the chances of the southwestern United States experiencing a decade long drought is at least 50 percent, and the chances of a “megadrought” – one that lasts up to 35 years – ranges from 20 to 50 percent over the next century.”

“Officials from water agencies in Arizona, California and Nevada signed an agreement last week to jointly add as much as three million acre-feet of water to Lake Mead by 2020.”

“Activities like using a hose to wash a car without a shut-off nozzle or using drinkable water in certain decorative water features will be banned, while infractions will carry fines of up to $500.”

Can California Conserve Its Way Through Drought? National Geographic

“If farmers adopt the latest efficient technologies, such as drip irrigation and precise irrigation scheduling, they could slash water use by 17 to 22 percent.”

“Three years of research show that by the year 2040 there will not be enough water in the world to quench the thirst of the world population and keep the current energy and power solutions going if we continue doing what we are doing today.”

In the Wake of Toledo, We Need Innovations to Prevent a World Water Crisis The Washington Post

“For more than 48 hours, the 400,000 citizens of Toledo, Ohio were told not to drink their tap water out of fear that dangerous toxins from algae blooms in Lake Erie may have contaminated the water supplies.”

“The San Jose Mercury News reports that Bay Area water agencies have lost from 3 to 16 percent of their treated water due to damaged underground pipes. The bad pipes have leaked enough water annually to meet the needs of 71,000 families for an entire year.”

Americans Use Twice as Much Water as they Think They Do, Study Says LA Times

“Americans underestimated their water use by a factor of 2, and were only slightly aware of how much water goes into growing the food they eat.”

Gulp: The Lake That Supplies Vegas With Most of Its Water Is Now at Record-Low Levels Slate

“According to Bureau of Reclamation data as of June 2, there’s never been so little water behind Hoover Dam since its construction in the 1930s.”

“Wheat is Oklahoma’s number one crop. In a good year, the state produces 120 to 140 million bushels. The U.S. Department of Agriculture forecasts this year’s crop will be half as big.”

“The city now consumes less water than it did in 1970, while its population has grown by more than a third, to 3.9 million people from 2.8 million.”

“The plan follows the successful model in Al Ain, which has become the first city in the country to reuse 100 percent of recycled water.”