As water prices have soared for farmers in drought-stricken areas of the country, farmers are considering ways to reduce their water usage and water waste. Here are five irrigation tools that farmers can use to save on their water costs. 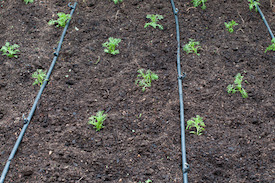 Drip Irrigation Systems
Drip irrigation is one of the most efficient methods for delivering water to crops with minimal waste. Currently, it is used on less than 2 percent of irrigated land in the world but it can reduce water use by 30 to 70 percent. Although it has a high initial cost, there are a number of advantages including reduction of evaporation, reduction of water consumed by weeds, and irrigation to an exact root depth of crops.

Water Flow Meters
Water flow meters can accurately measure how much water is being used to irrigate so that water use can be precisely managed and unnecessary watering can be avoided. Using the flow rate from the flow meter, the volume of water used to irrigate for a certain period of time can be calculated. Monitoring flow rate can also help farmers discover problems with the irrigation system such as costly leaks and is one of the easiest irrigation tools to implement.

Soil Sensors
Measuring soil properties such as moisture can help farmers determine how much water is necessary to keep crops adequately watered. According to the University of Nebraska, the ideal precision agriculture system includes a sensor in the soil that is connected to a device that analyzes the data and changes the flow rate instantaneously. Soil sensors can help farmers understand the condition of roots to suggest when it is time to irrigate or when the plant’s thirst is quenched to prevent wasting water, washing nutrients down the soil, and developing a shallow root pattern.

Irrigation Management Mobile Apps
Mobile apps that can assist farmers with irrigation management are continuously improving. One example is FieldNET Mobile, which allows users to control and monitor irrigation equipment from their iPhone or Android device enabling farmers to quickly adjust their irrigation based on changing conditions. Smart Irrigation Apps, developed by a University of Georgia agricultural scientist, helps southeast farmers plan their irrigation based on how much water their crops need and data from local weather stations.

Drones
The Association for Unmanned Vehicle Systems International estimates that farms will eventually account for 80% of the commercial drone market. Thermal cameras on drones can be used to detect leaks and determine if crops are getting too much or too little water. Although, the FAA does not currently allow drones for commercial use, there is a proposal under review to change the law and farmers can currently apply for exemptions.