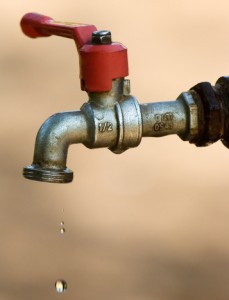 Rising Sea Level
According to the United States Environmental Protection Agency, rising sea levels can turn coastal aquifers into saltwater and cause problems for the local water infrastructure (this is known as saltwater intrusion). An example is the Biscayne aquifer that supplies water to the Florida Keys. Rising sea levels would add saltwater to the Biscayne aquifer, making it saline.

Increasing Droughts
According to NASA climate modeling, the increasing temperature will make a megadrought highly likely in the Southwest before the end of the century. The researchers estimate a 80% chance that there will be a drought spanning multiple decades in the Southwestern United States which would cause devastating shortages in freshwater supplies.

Changes in Snowfall/Rainfall
Increased temperatures result in decreased snowfall in the mountains which lead to less freshwater flow to rivers. The California snow pack is already at the lowest levels on record and this has put significant stress on the state’s reservoirs. Higher temperatures also lead to increased evaporation which means more water in the atmosphere and less rainfall in some areas. Climate models predict a strengthening of existing precipitation patterns, meaning dry areas will get drier.

Extreme Rainfall
Climate change is projected to increase major storms and flooding especially in the Midwest and Northeast. Flooding can damage the water infrastructure that treats and distributes freshwater. It can also overflow sewer systems and cause rivers to come in contact with pollutants, both which can contaminate freshwater resources.

Melting Glaciers
Since glaciers provide a major source of freshwater, shrinking glaciers will reduce the availability to accessible freshwater. Scientists at a meeting of the American Geophysical Union said that glaciers in parts of the Canadian Rockies will shrink to 5 to 20 percent of their current size. Glaciers are like reservoirs that store water in the winter and release it in the summer. They currently store about 69% of the world’s freshwater. More than one-sixth of the world population relies on glaciers and seasonal snow packs for water resources. If all land ice melted, the sea level would rise 230 feet globally.