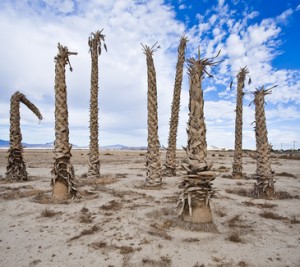 Drought is a word typically associated with places that have more radical climate swings than the U.S., like the windswept expanses of the Middle East or the dry, cracked earth found in the Outback.

Unfortunately, though, the U.S. also experiences its share of rainless days and some places suffer more than others. While isolated areas among the Plains States and the far-flung towns in the wilds of Texas are some of the driest imaginable, this article focuses on drought-prone metropolitan areas.

Here we take a look at five U.S. cities experiencing droughts based on data provided in the U.S. Drought Monitor as of July 10, 2012, which means these places are experiencing droughts currently and is irrespective of historical susceptibility (although many of these cities routinely experience severe droughts).

It’s no secret that all of Colorado is being ravaged by drought and wildfires, but Colorado Springs is the metropolitan area nearest one of the most extreme areas of drought.

The problem of drought in the region is being exacerbated by the heat of the wildfires, which is creating ash and clogging what water resources are still flowing. Relief is needed before an even greater threat to the city’s water supplies occurs.

The farmers in Little Rock attempted to outsmart the heat by selling what they could before it was scorched in the field and prices went down, but now that the available produce is gone prices are going up – and staying up.

Of course, that’s just one problem out of many that is being caused by the drought. The searing heat and lack of water is wreaking havoc on livestock and making life unbearable for Arkansas residents.

Las Vegas is usually the big name in the news when it comes to drought and it’s true that nearly the entire state is now under an advisory for severe drought, but Reno is under threat of extreme conditions.

The good news is that Nevada’s winter was a good one and the reservoirs are full and new technologies are helping to protect corn crops, so aside from the heat most people in the state are faring relatively well.

St. Louis is approaching nearly one full month of temperatures above 90 degrees and the combined lack of precipitation has pushed the region to extreme-drought conditions.

Meteorologists say the area would have to get between 12 and 15 inches of rainfall to begin a return to normal saturation levels. The city is just one of many to be swept up in sprawling drought conditions that have not been so widespread since 1956.

Phoenix, yet another desert town that grew into a city despite not having enough local water resources to support the expansion, is always in need of more water. This year’s drought, however, is leaving it thirstier than usual.

Arizona meteorologists and residents alike are looking forward to a wet summer monsoon season that is anticipated to end the current drought, and all hope this year’s storms are wetter than usual considering the state’s light winter rains and seemingly unending heat.